The intro for this episode was performed by Morgan Ritson. You may remember him from Ten Minutes of TV Time. As you can hear, he’s a bloody good voice artist and you should reach out to him to see if he can work on your audio projects.

The main image for this episode’s show notes contains the logo for the amazing Capes on the Couch podcast. Definitely go check that show out, it’s a tonne of fun, and they tackle a very important subject. 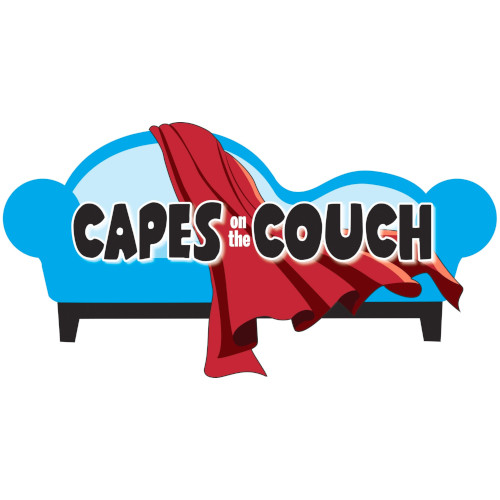 We talk with Anthony about his podcast (which deals with exploring the mental health aspect of comic book characters), and as such need to bring up mental health points. We can’t say whether anything in the episode will offend, but what we will ask is that you listen responsibly.

But also that you look after yourself and, if you can, someone else too. Please consider getting help if you need it.

Anthony of the Capes on the Couch podcast joined us, and we wanted to take a few moments to discuss both his podcast and mental health. Mental health is something which is important to both Jay and Squidge, and they take it very seriously.

if you need help, please go get it. There’s no shame or stigma attached to it

Anthony describes the show as:

Capes on the Couch is a podcast that my best friend, my brother, and I have been co-hosting now for four and half years. He is a board certified psychiatrist, and I am a comic book aficionado. And each episode, we take a look at a particular character, a group of characters, or sometimes a theme; and we examine their mental health issues, any concerns that they have, what’s going on in their life that might cause them strife or distress… and what would the treatment of the real-world analogue look like.

We do it to destigmatize a lot of the discussions around mental health, because there’s this big bugaboo about if you’re feeling sick then you go to the doctor; if your leg is broken then you go to the doctor; but if you’re feeling depressed or you’re hearing voices in your head, or if you are going through something in your life and you go to see a therapist, "oh we don’t talk about that. Shh. Don’t tell anybody about that." And it’s just as valid and necessary.

Which, you’ll agree, is an amazing setup for a podcast. And a very, very important topic to discuss. And it’s such an important point that Jay and Squidge wanted to explore it for a big enough portion of the episode.

Along the way, Jay talked about the wonderfully creepy world of deep fakes. He brings up a fantastic video by Corridor Crew where they took all of the appearances of their lawyer on their podcast, fed them into Descrypt

to build up a machine learning model of his voice

then used GPT3 to write a script for a speech, and had Descrypt create the audio for the speech. Effectively, they had a set of machine learning tools generate a full speech, and delivery it to the rest of the company. It’s wonderfully dystopian:

And the reason that Jay brought this up because, looking at his podchaser profile Squidge has edited almost two weeks of continual content with Jay’s voice in it.

NO NEED TO WORRY JAY, I HAVE ALREADY DEEP FAKED YOUR VOICE

After almost 40 minutes of discussion on comic books, superheroes, and mental health

if you need help, please go get it. There’s no shame or stigma attached to it

Anthony brought us back on topic, and with the Recent Games segment.

And when discussing Legend of Zelda: Breath of the Wild, both Anthony and Jay talked about a “Parent mode” or “Previously on… mode”

where it just gives you like a 60 seconds of, "here’s getting you back up to speed; here are the characters, the story, and how they’re all interacting; here’s your current objective, where you’re going, and where you came from."

Hello adventurers. Do you enjoy stories about monsters and magic? Welcome to Autumn Falls, a cozy small town in the Pacific Northwest. There’s mysteries to uncover, but first let’s check in with our heroes.

Can I get verbal confirmation that none of you will say anything about what you saw today? Agent Lonnie Whitaker reporting in from the Eastey Agency.

it’s really weird, and bizarre, and a whole lot of feeling stuff that I did not want to get into it. So I kind of booked it out of there. I’m Raven Eugenia.

I just wanted to be friends because that’s what everyone else was doing? My name is Damien Edgecrest.

Clearly talking to the tree is not a normal thing that people can do. I’m Felicity Starnbrook.

If you’d like to join our heroes as we play Monster of the Week, then check out The Storyteller Squad, available wherever you listen to podcasts.

Let’s have an adventure.

Wasting almost no time, Anthony hit us with his choices almost before Jay had finished explaining the rules. Those choices were:

And talk of NHL games reminded Squidge of a story about why he’s not allowed to play NFL games:

Jay had a game for the OG Xbox called ESPN ‘04, and you can create your own characters. And I’m not allowed to play them anymore. I’ll let Jay tell more of the story.

I created a player for Squidge, and put him as one of the defense players, and we ended up coming up with this mythology of… the helmet grill was as many bars as we could fit on the helmet. And we said that that was because Squidge’s [player] had to be locked away in a cage. Because every time we would play, and he’s manage to sack one of the [other players], they would end up injured and would be off the team.

So he’d be out there decimating the [other team]

Within the first three minutes, the game would be called off because I’d injured too many of the opposing side.

We mentioned 50 games in this post. In the following order, those games where: