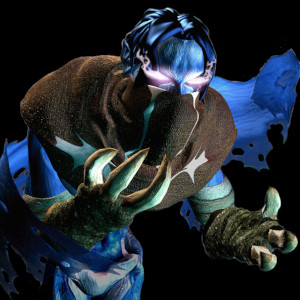 Because we’re talking about some of the entries in the Legacy of Kain series - a series of games about vampires going around and doing what vampires do - we’d recommend that you skip this one if you have little ones listening, or are in a space where listening would be inappropriate.

This week’s episode starts with Squidge in the Nosgoth underworld… or was it Brighton?

But before long, the boys where joined by Raina of The Ancient’s Den, the person behind the Soul Reaver HD Mod, and all-round amazing person.

And Raina takes us back in time to the late ’90s - gaming magazines, demo discs, and incorrectly spelt main characters - when bringing us up to speed about how they got involved with the Legacy of Kain: Soul Reaver. This was a time of internet cafes

and before widespread use of email.

Jay also shares a story of him playing around with the MP3 encoder on his home computer so that he could MAYBE load a single MP3 onto a single floppy disk.

I would go down to the library with a stack of floppy disks, which was my music library… I would swap disks after each song.

And Squidge tells us that he first played Resident Evil 2 as a 9 year old.

I was so bad at playing it, I thought that it was a zombie feeding simulator.

Before we could talk about the HD mod, Jay asked Raina to…

The controller is really big and bulky, and it uses batteries… come on!

Not for anything other than the missing features. So with Legacy of Kain: Soul Reaver, they had to break the controls to make it work.

The dual sense really surprised me… You can really feel the rope as your character climbs down, and you can feel tension when you pull an arrow.

And both Raina and Squidge agree that the PlayStation controllers from DualShock on-wards are fantastic for FPS games.

I don’t know whether it’s because the analogue sticks are on the same level.

Raina describes the origins of the mod by taking us back in time to the release of the original Legacy of Kain on Dreamcast.

They literally had three months to create the port, and that’s not a lot of time

Strangely enough, during the process of porting to Dreamcast, the graphical assets were reduced by quite a lot - meaning that the “inferior” release on the PlayStation TECHNICALLY has better graphics than the Dreamcast version.

They didn’t have a lot of time, so I don’t blame them.

And Raina is calling this a “remaster” (or sorts) as the mod contains MUCH higher resolution textures which are swapped out, at runtime, by the Flycast emulator for Dreamcast.

You should certainly take a look at the comparison screenshots on the project’s website here: https://www.sr1hdremaster.com/screenshots

And this episode was no different as we asked Raina what they have been playing in between HD-ifyinf sessions:

We mentioned 37 games in this post. In the following order, those games where: