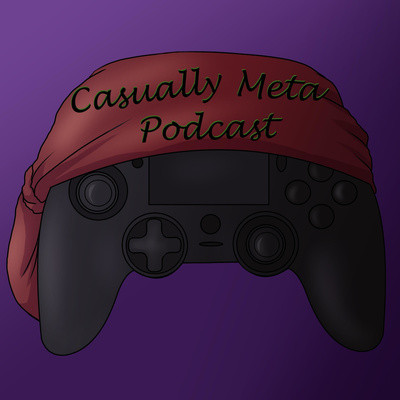 We start with an immediate (censored) swear, which really sets the tone for this episode:

Stick that sh*t on the calendar

Even though he tried his hardest to stop Squidgey from burping into the microphone, Jay was completely unable to. So we apologise for that.

Our appearance on CJ’s show was centred almost exclusively around Pokémon - which is also a topic we covered recently on the show, in an episode with The B.

And before we got onto the episode proper, we asked CJ to describe his show to you all:

The premise is that I’ve been sucked into a virtual world and that I’m aboard a pirate ship called The Casually Meta. And the sea captain, Captain Seven-Sea Savy, uses an inter-dimensional transporter to pop me into different video game worlds and has me take people hostage and bring them aboard to interview them for arbitrary information which hold no actual relevance to the ship itself, but is just about video games.

CJ also points out that the captain in his show is an homage to Anne Bonny, a real pirate who struck fear into the Caribbean; and not just because she was a fearless female pirate. And, of source, talk of pirates lead to talking like a pirate, which reminded Jay of this golden oldie from Loading Ready Run:

Although the sheer amount of time required to raise the Gigas is currently holding CJ back from playing it - which reminds us of how much real-world time is required in order to get your character trained up for EVE Online.

And CJ has been staying away from that game too, because of the entire Blizzard/Activision

and several other companies

But there are too many hackers involved in that game

I booted it up, and that’s where my problems started

And this sparked a conversation about the recent

at the time of recording

news that the first two Kingdom Hearts games are coming to the Nintendo Switch as cloud based games. As in, “you need to be connected to the server where the game is running in order to play the game” based.

… which is bonkers. Especially for a console which is meant to be mobile, with games played on the move.

It was also CLEARLY only OKd because Nintendo wanted to put Sora - the hero from Kingdom Hearts - into Super Smash Bros. Ultimate. Which was the very last chance we had for a Surprise Waluigi, and we were screwed out it completely.

Which is a wonderful mishmash of the best of Halo, Unreal Tournament, and Portal. If that previous sentence is lighting up the gaming pleasure centre of your brain, tell them that Jay of the Waffling Taylors sent you.

Jay had finally gotten around to playing the FF VII remake. He has made it to the plate fall

wasn’t that a song by Adele?

rescuing Wedge, and rebuilding Sector VII. But had to take a bit of a break from the feels.

We’ve discussed this title at length on the show already. Here are each of the episodes where Squidge and Lulu have talked about the FFVII remake, in the order that we’d recommend listening to them:

That’s almost 6 hours of us talking about the remake so far. And that’s before Jay has had a chance to talk about it.

Wasting almost no time, CJ hit us with his choices almost before Jay had finished explaining the rules. Those choices were:

For folks who want to know, we’ve yeeted ourselves through the portal too, and our choices were:

CJ chose the Duke controller for the Xbox.

If you’ve ever seen a Nintendo Switch, or someone’s head…

Here’s a shot of Squidge’s recreation Duke controller from Hyperkin next to his Nintendo Switch:

My main problem with the Borderlands games is the same problem I have with the Kingdom Hearts games: there’s about 12-ty bajillion of them

Only two of them are worth playing

And now there’s a movie in production, too.

Where did y’all enter into the series?

CJ started his Borderlands journey with the beta key for PC, and it left a sour taste in his mouth

Squidge started on the same game (the first) but on the Xbox 360; he also played the same character throughout the game series, too: Lilith.

spoiler alert: the game yeets you back to the start

And The Zombie Island of Dr. Ned was the best piece of DLC for the first game.

For me, it was a forgettable shooter with RPG elements

It was always better with multiplayer

And we all agree that the best character in Borderlands 2 was Tiny Tina, with Ellie being a close second.

If you had any motivation to do a mission, it’s that: "because crumpets are crunk"

Where Should New Players Start?

Both Squidge and CJ agree that the best place for new players to start with Borderlands is the second game: Borderlands 2.

It gives you a brief overview of what happened in the first one, and it’s like three sentences

And those sentences are:

They opened the vault; they found another one

This was a tough question for all involved, and we all took some time to really think about our answers

Vaughn here is the guy who runs around in his underpants yelling out “BLOOD FEUD!”

Jay was up last, but only had the one character who wasn’t mentioned by CJ or Squidge:

And we all agree that Mad Moxxi is one of the most three dimensional, well written yet enigmatic characters in the game series.

We mentioned 43 games in this post. In the following order, those games where: