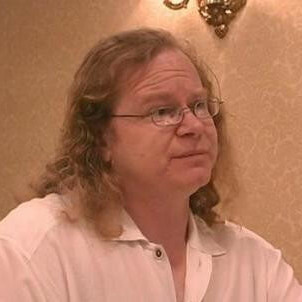 One of the things we cover with Gregg is the swear-y easter eggs in the first two Discworld games. We’ve bleeped the swears, but it’s worth knowing that we cover that aspect of the games.

Unfortunately Squidge was not around for the recording of this episode as he was unwell. And that’s a real shame because we interviewed Gregg Barnett, a real legend in video game development.

Gregg has been around in video game development since the early 80’s and has seen generations of people saying:

Which has been proven to be wrong year in and year out. In fact, we have huge, global, e-sports tournaments where folks play video games competitively these days.

… then again, you all know that

Gregg really does have a lot of experience in the gaming industry, and it goes back to him noodling around with an Atari-400. That noodling got him a job at Beam/Melbourne House. First came the ports and sequels, but then came the first original idea:

I really loved hearing the story of how Gregg knew that it was a hit. But before he told us that, he told us how folks used to code games by clearing out memory before actually writing the code. Which is something that you had to do, back in the day, because you couldn’t guarantee that the previous applications had cleared up after themselves when they closed.

Gregg and I had a wonderful chat about programming through the decades. This is something that I have a keen interest in, because I love to look back at what the older tools and languages give you

I’m still working on something for the Mega Drive/Genesis, btw

And we ended up talking about Unity, Unreal, CryTek, and all of those other wonderful engines, and how they can take you so far away from what you’re building. They take you so far away from the hardware that when something goes wrong, it really goes wrong. He then tells us about a 5 hour long assembly run, and how it took almost all night to do the final assembly production run for The Hobbit on September 26th, 1983

Back in the 1980s, creating new games usually lead to creating whole new genres. This meant that the real innovation was partially in getting new ideas down, and partially pushing the hardware to the very limit. Which is what you always get when you want to outdo the competition.

It was during this point that I talk about an article where someone had taken the Amstrad CPC 6128, reverse engineered the code, rewritten it, and made it better. Here is that article: https://fabiensanglard.net/cpc/

if you’re a dev, and want to see a genius at work, then read this article

Which I used as an example when asking Gregg about whether he would want to make something new with some older hardware. Which Gregg recommends people do, if they really want to learn about the hardware or want to see what they can do; but he wouldn’t do it himself, and that’s fair enough.

We then started talking about the classic point-and-click adventure game: Discworld. We discuss how that came to be - including how Gregg won the contract - the ideas which went into the games, and what some of the ideas for more games would have been.

Rincewind was always going to be the main character, as he was iconic.

When he first told me about how Gregg got the license to make the games - beating out the frankly massive competition - it blew me away. Seriously, how both Sierra Online and EA missed out on this is just phenomenal

then again, can you imagine what that would have been like?

I wont recreate the story here, you’ll have to listen to the episode to find out how it all came to be

Next up was a conversation about the puzzles and scenes in Discworld that Gregg loved the most. One of my favourites has always been:

Which starts a scene where Rincewind puts the false teeth into his mouse and bites the mouse on the neck, drawing blood. The blood is then collected in the test tube and used to summon Death.

Gregg brings up the only key based puzzle in the first Discworld game, which was a direct parody of the overuse of key based puzzles in point-and-click games: it’s right where you need it, but it gets snatched away just as you grab it.

But one of his favourite puzzles

and the most notorious puzzle from that game

was the one involving this guy:

The most interesting point that Gregg makes about this puzzle is that veteran point-and-click gamers seems to just not get this one, but folks who were entirely new to the genre just simply got it.

We also talked about the fourth-wall breaking pop-culture references, like the intro sequence for Discworld 2:

I wanted to know the genesis of this story, and Gregg delivered in the best way possible.

which you can watch here:

Discworld Noir was written by Chris Bateman, and went in a completely different direction to the previous games. What prompted this decision and what was it like to let go of the reins?

You’ll need to listen to the podcast in order to hear Gregg’s answer to this one.

And you’ll need to listen to the episode to hear this discussion, too

talk about being a tease!

The advice for aspiring developers was:

If you’re in the UK, you don’t have to move country; you don’t have to move to London. But you’ve obviously gotta try and get into the industry anyway… but the key thing to do is to get some sort of portfolio. Whether you’re a programmer, or an artist, an audio person, or even a game tester… you definitely need the portfolio. You can’t just turn up at a job and say, "I’ve done a course at so-and-so university. I’m a programmer, or whatever"

There’s a lot more to it, so I’d recommend listening to the episode for his advice