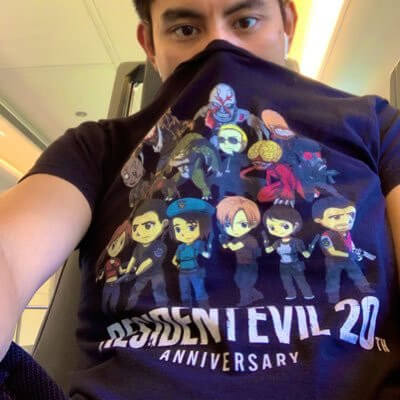 As this episode is about Resident Evil, and the RE games are all about biopunk and survival horror, we’d recommend that you give this episode a skip if you are with little ones.

Alex and I has a discussion at 1 hour and 16 minutes about a Japanese word which, when said backwards is the name of a female body part. We don’t translate it but, if you listen hard enough, you’ll know what it means

it’s a loan word from English

Back in April, we had the chance to interview Alex Aniel (aka cvxfreak) about his upcoming book “Itchy, Tasty: An Unofficial History of Resident Evil”, and all of the weird and wonderful stories that were involved in the making of the first generation of Resident Evil games. Alex lives in Tokyo, works in the video game industry, and was able to interview a number of the key staff members for his new book, you see.

Seeing as how Squidge and I are huge fans of the Resident Evil games, we just had to chat with him about his book. But before we did that…

remember, we recorded this back in April

what could potentially lie in store for us in Resident Evil 8, and Alex drops some knowledge on how the GameCube games, an the Resident Evil 2 remake came to be.

And we have a discussion about timezones and how difficult it is to get international business and software relating to timezones right.

The main portion of the show is all about Alex’s upcoming book; which (at the time of writing these show notes) is still on Unbound

you can find it here

So one fascinating thing that I found out from my editor is that, apparently in the UK, people call flashlights "torches"

And because of the lockdown unfortunateness, the book might end up being delayed a little. But I’ll point out that this episode was recorded in April, so that may no longer be the case.

We then talk about how the working title

of the book is “An Itchy, Tasty History of Resident Evil”, and how that comes from a wonderfully absurd moment in the first Resident Evil where someone dies, in the 2nd person, across a series of journal entries.

The text of that entry reads:

which actually means “itchy tasty”. There’s also an interesting thing here about the inclusion of spacing between the words, which is something that written Japanese doesn’t tend to have. I’d recommend taking a look at this page for more analysis on it. Or indeed backing Alex’s book, as it will no doubt be covered in it.

We then talk about the content of the book

without giving everything away, obviously

including a section all about Sweet Home, which has an interview with the creator of Sweet Home, Tokuro Fujiwara. And Alex drops some knowledge on us which might seem a little weird at first:

especially the ones that I love

And to get a taste of that, it’s worth reading the Polygon excepts from the book:

Naturally, we discuss the Director’s Cut Dual Shock soundtrack debacle. For those who don’t know what I mean by the debacle:

[1/a few] I was just reminded of Mamoru Samuragochi. Why? I’ll get onto that in a moment. If you don’t know who that is, he composed the soundtrack to the Director’s Cut version of the original #ResidentEvil I call it the dooty-doot version youtube.com/watch?v=0kcF7E…

take a moment to read the thread for a little history; we also talk about it in this segment

And of course Alex talks about it in the book. And apparently, some of the folks involved in the games had never heard the piece we were talking about.

He also shares an anecdote about that piece

which was originally in the book, but was removed for “taste” reasons.

A Question of Versions

We talk about the cover art for the original Resident Evil:

And we also mention the UK boxart for the Director’s Cut Dual Shock edition:

And that the Director’s Cut was released because RE 2

How Did You Get Into Resident Evil?

We then asked Alex about his history with the series. It turns out that Silent Hill and Code Veronica were his way into the series. Not a bad place to start, I must say.

It was distrubing. And it was my foray into satanic, occult, grotesque, any word that kind of fits in that framework. But I loved it, which sounds really strange to say.

What Set’s The Book Apart from Youtubers?

and really well, too

and considering that he lives in Tokyo and that the majority of the folks who have worked on the RE games only speak Japanese gives him the one up over the English language only YouTubers and bloggers.

As one of the few bi-lingual Resident Evil fans, I try to use that as an asset to help the community.

I’d recommend skipping to 18:54 to get directly into the interview and commentary

at least, in my opinion

as the majority of them don’t hide the fact that they are just opinion pieces.

Which Games Are Covered In The Book?

Everything that I would call a "milestone release" gets a chapter, or at least a section in the book

Which means that the following are in the book:

We mentioned 43 games in this post. In the following order, those games where: