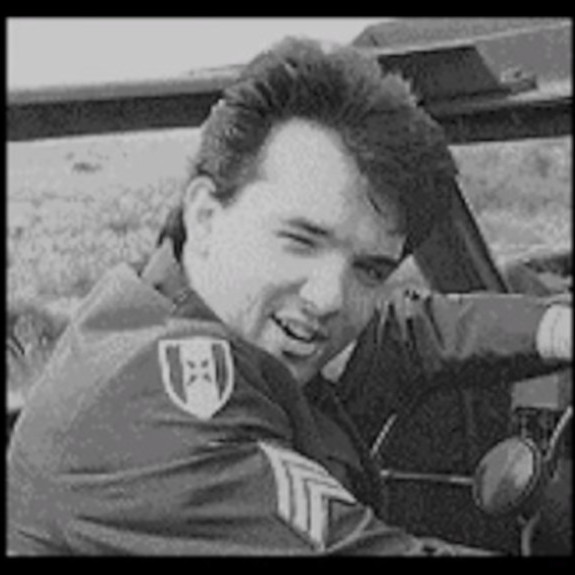 Firstly, make sure that you stick around for the stinger

the bit after the outro music

And we have a complete legend on the show this week. So much so that Squidge wanted us to record a special intro skit

it’s related to the episode, honest

We were joined by both G (aka #dontCallMeAudrey) and Stoo Cambridge

Before we get into the show notes proper: our thanks go out to Arcade Attack for introducing us to Stoo at EGX this year. Also, there’s no “what have you been playing?” section; that’s next week.

Before we got into the interview proper, I dropped the bomb that we’d recently found out that we have some Japanese fans

maybe on my next trip to Japan…

But we jumped directly into a question about the Amiga CD32 intro for Cannon Fodder - which was a full motion video intro. Here’s an embedded YouTube version of the intro for your viewing pleasure:

I flubbed and said Virgin

which may have still had some stuff that Stoo was working on, which leads us onto the topic of backing things up.

seriously folks, back everything up

I then mention that it’s fun to hear about the source files for older games magically turning up in the strangest of places, and tell everyone about how the Prince of Persia source code (for the Apple ][) was randomly found in someones garage a few years back, and Squidge makes Pratchett reference when he talks about things going Wahoonie shaped.

Stoo then talks us through his latest project: Ian Livingstone’s Deathtrap Dungeon. Stoo is working on this with the folks from Branching Narrative

which was available as a playable demo at EGX, this year

It really was a lot of fun to play, and would recommend taking a look into it. Plus Eddie Marsen’s acting in it is bloody brilliant.

Squidge’s initial meeting - back at EGX - with Stoo was cut short by him having to rush off and get a tattoo:

I lean on the recent interview that Stoo did with Arcade Attack for one of my questions: comparing the impact of characters dying in Cannon Fodder to the same impact

in the Call of Duty games. Stoo tells us about how the limitations of the older hardware really helped to push the design of the games, and drive investment into the arcs of the characters. We then discuss some of the differences between the Atari Jaguar version of Cannon Fodder and the other versions.

I then ask Stoo what his favourite title to work on was. Interestingly enough, it’s one that was never released: The Last Starship. You can see some of the artwork for it over on his website. Stoo also mentions a title called Molotov Man - which you can read about on Nintendo Life. It seems like a great looking Bomberman-like game, too.

or something similar to it

could still see the light of day. Especially with titles like Tanglewood and Xeno Crisis making it big on the Sega Mega Drive / Genesis.

Let’s create a new Mega Drive game, but use all this new technology to develop with

We also talk about how the older games seem to have been created with a higher level of quality, since once the game had shipped there was no way to fix it. So it had to be finished. Stoo then talks about how he may look into creating something for one of the older machines, and I agree that there’s something in the challenge of limiting yourself when creating something.

And it was this conversation which sparked off my interested in looking into creating something for the Mega Drive. This tweet shows a super early version of what I’m working on, but I’m still making progress:

It was then time for G’s questions, and what a set of deeply philosophical questions they were:

So obviously with 30-odd years in and around the industry, I’d like to lead with unfortunately a very obvious question I feel that you would probably be very well pitched to be able to answer for me: why is the word ‘big’ so small, and yet the word ‘infinitesimal’ is so freaking huge?

And I have to agree that Stoo handled that question really well, in the most technical way.

And suddenly Cannon Soccer is mentioned:

For those who can’t (or don’t want to watch) the video: imagine Cannon Fodder meets Sensible Soccer. You control a squad of elite soldiers, and you have to fight your way through a football field. Some of your enemies are soldiers, some of them are football players. It was a free game, given away as a cover disk

for the youngsters: those were free disks given away with magazines, which included demos

Also, we might have to make “Bill and Ted’s Arcade” into a segment.

If I were to say to you: ‘The red mongoose flies at night, but only when the waxing gibbous moon is in the West over Slough,’ what would be the correct response?

Stoo then brings up a good question:

So what do you guys think about this news about Rebellion buying the Bitmap [Brothers] back catalogue?

I bring up the Analog Mega-SG, and Stoo talks about the MiSTer

I really want to get myself an Analogue Pocket

and this sparks a wonderful conversation about how we’d all love to relive the aesthetic of being able drop a real cartridge into something which matches the form factor of the original hardware, but uses more modern circuit design - like the MiSTer and the Analog series of devices.

Stoo leaves us with a helpful hint on how to get some really good viral marketing going at your local video game store. But before he goes, we talk about how I might ask Stoo back on the show to discuss development tools - as I’m looking to create a game for the Mega Drive / Genesis in 2020.

We mentioned 27 games in this post. In the following order, those games where: