At the very top of the show, I use the phrase:

Day three of EGX was amazing! Easily one of the best days of the entire event.

Dr. Browse McBigTash says, “Day 3 of #EGX2019 has begun! Download episode 56 of The Waffling Taylors Podcast for their thoughts on day 2!” He also said to pull his fibger, but I wouldn’t advise it. 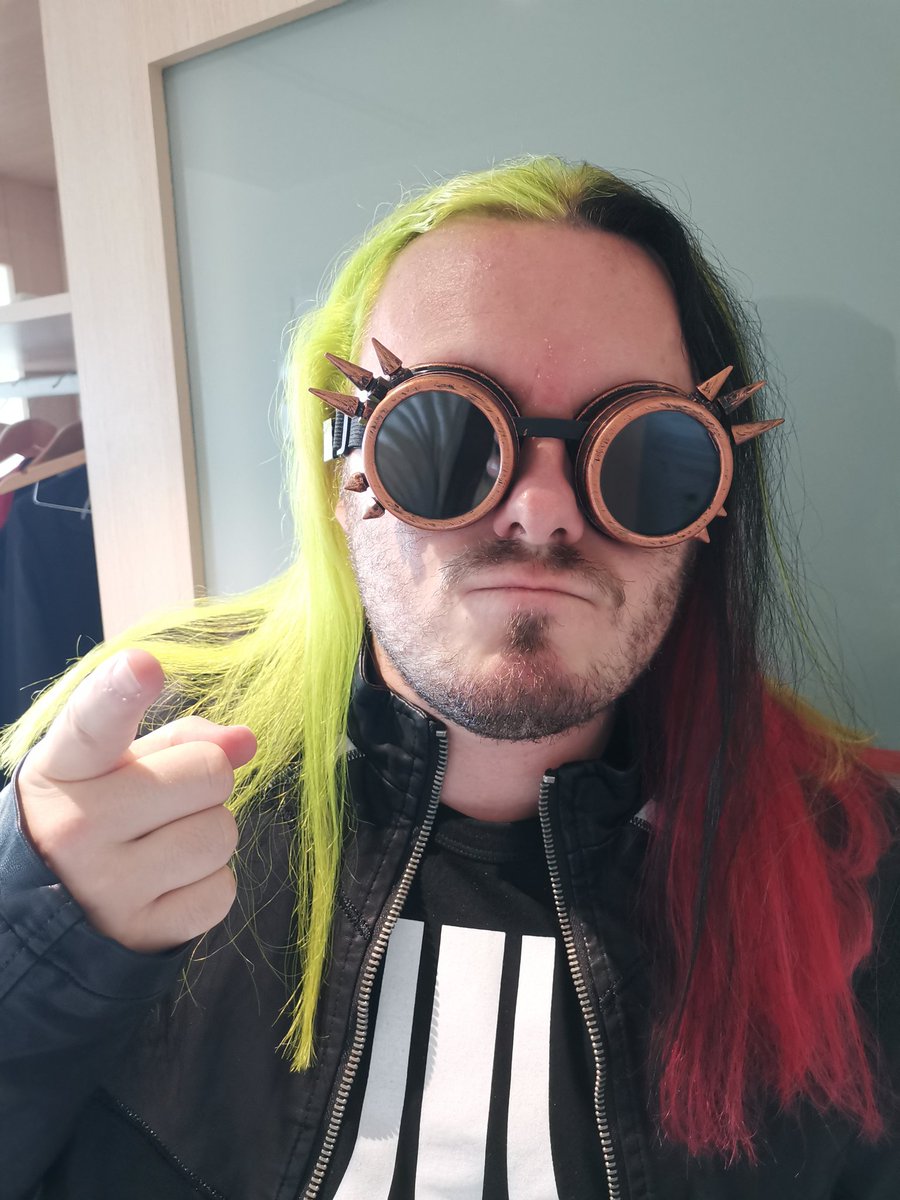 To start with, whilst I was playing the worst version of The Queuing Simulator ever, Squidge decided to leg-it back to the hotel in order to get his passport. Why you ask? Because the passport was required for this:

Just about to get a tattoo at #EGX2019 Wish me luck. -Squidge

he refers to it as being perforated

by the wonderfully awesome Tori Robinson. We’d both recommend getting inked by Tori, if she is at a convention near you.

Shortly before Squidge got inked, I was standing in the queue to try out the Final Fantasy VIII Remake. I was in the queue for about an hour, and took roughly 3 or 4 steps forward - it was a very popular game. If I’m honest, I don’t think that it was very well managed.

Then again, this happened: 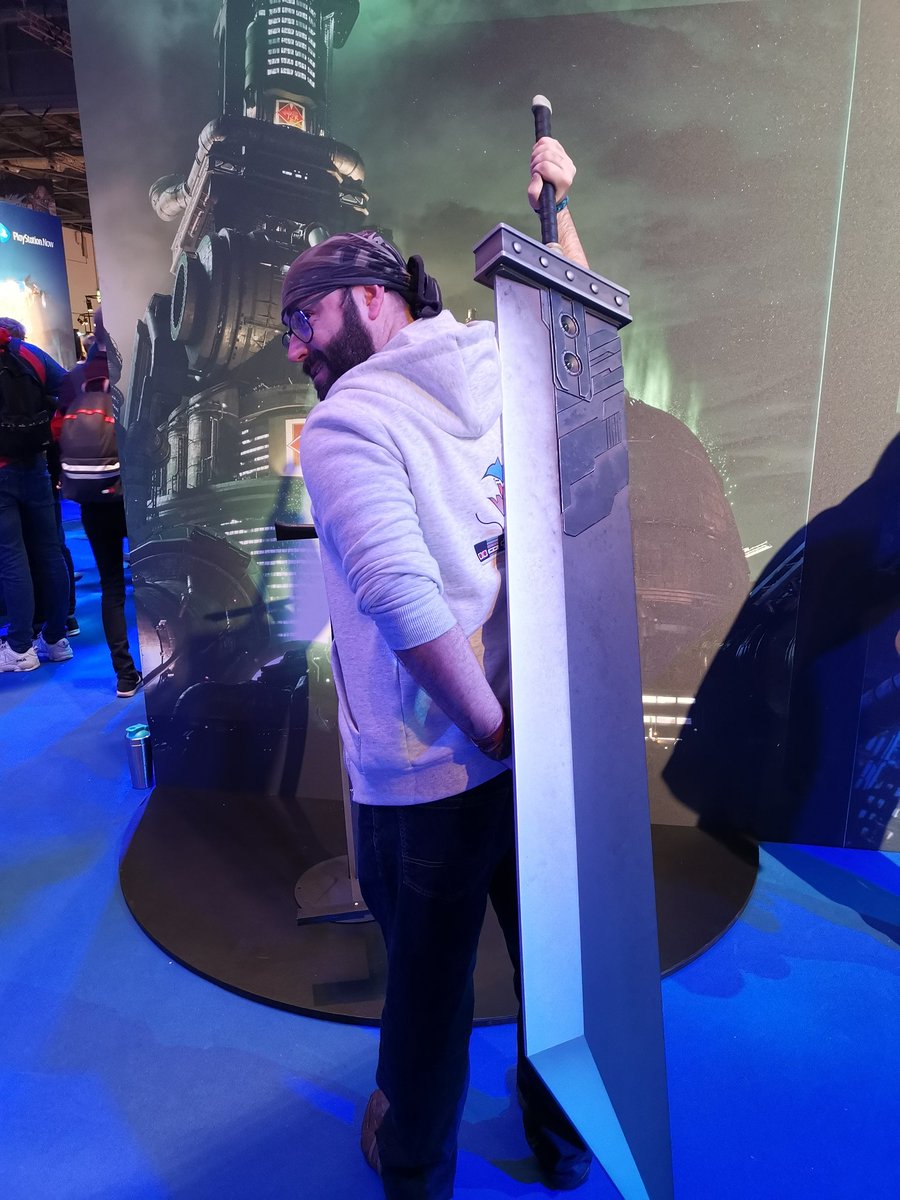 After I gave up on queuing for something which was never going to happen, we met up with The B, Becski, and Simon.

We ended up playing a card game that I can’t correctly recall the name of. It was fun, but very stupid

my favourite kind of game, really

And shortly after that, we met up with some of the Arcade Attack crew, and took a wander over to see the new Deathtrap Dungeon game. Then suddenly:

Today we met an absolute gaming legend. Definitely check out the Deathtrap Dungeon game from @BranchingNarra. The demo they have at #EGX2019 is a lot of fun and incredibly innovative. #selfieWithStoo 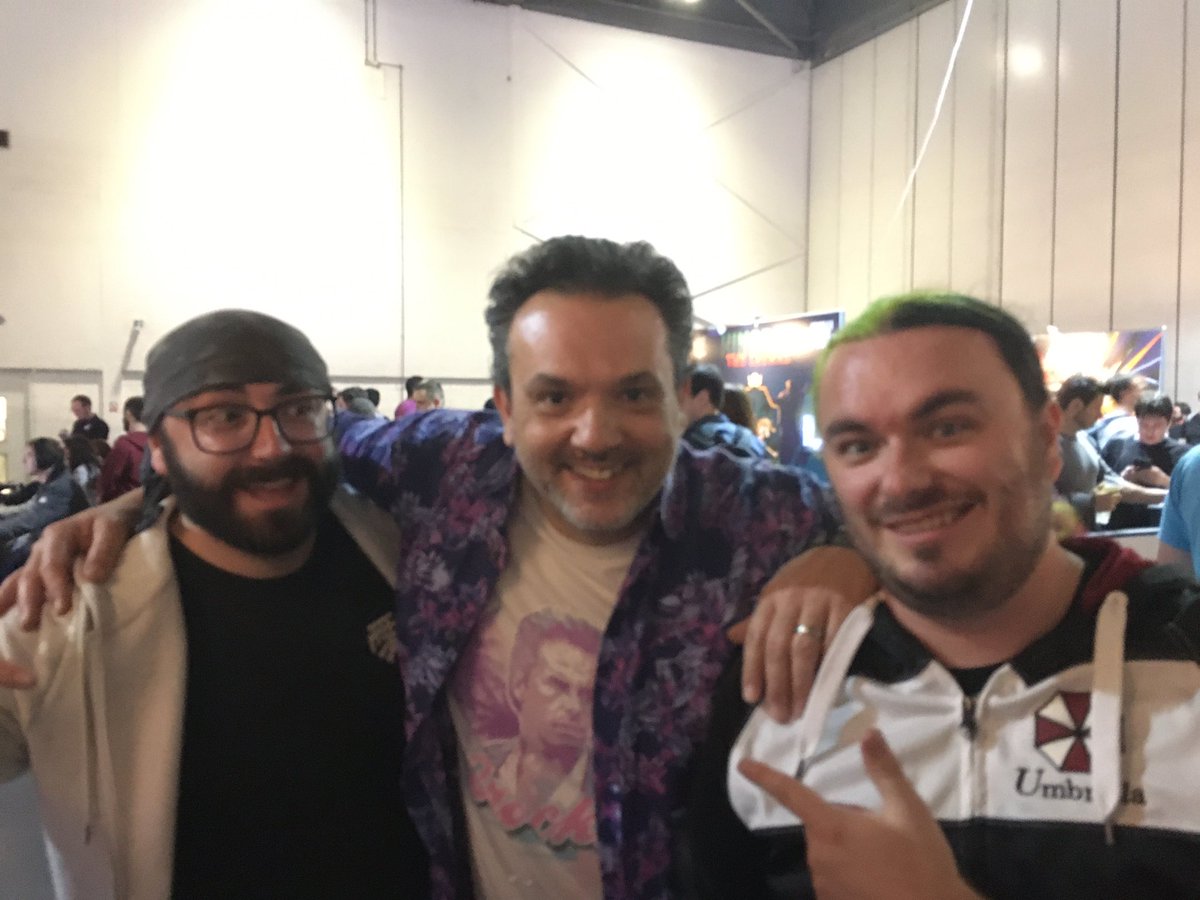 Thanks to Adrian from Arcade Attack for introducing us to Stoo Cambridge.

And it was shortly after that, that Squidge went to get perforated, and here is his tattoo:

Oh yeah, you guys haven’t seen my tattoo from EGX have you? I mentioned it but didn’t show you, so here it is in all its Glory seconds after completion. Whadya think? -Squidge 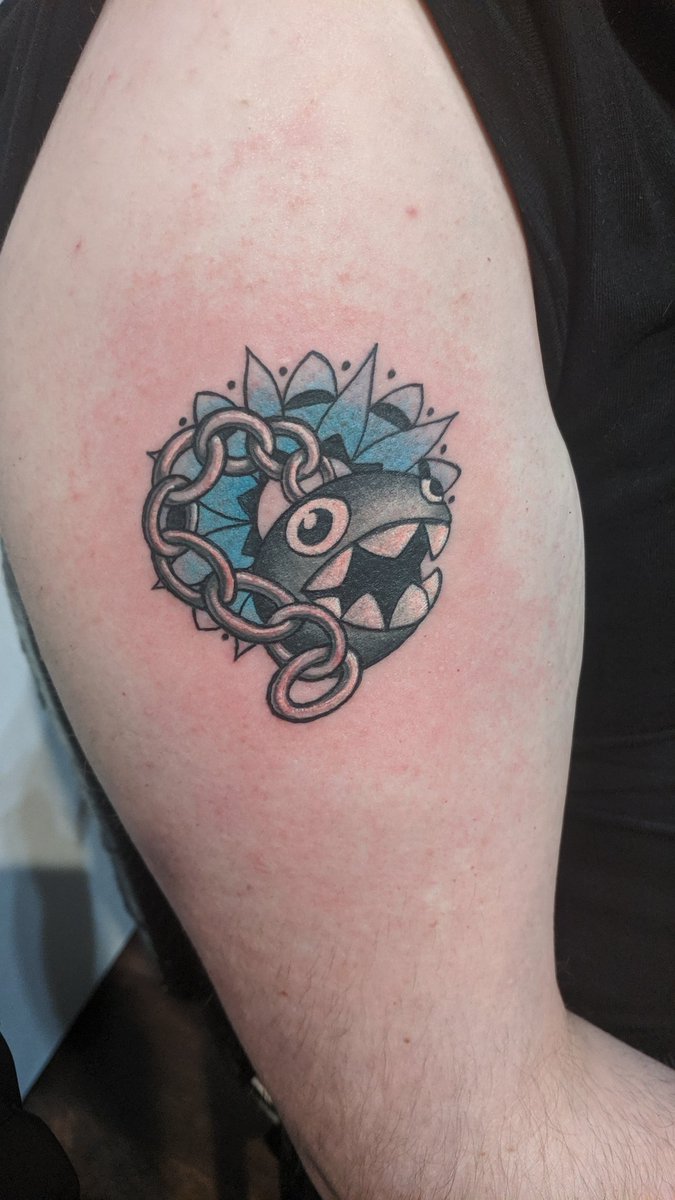 Whilst Squidge was getting inked though, the Arcade Attack dudes and I went and played some retro games. Including a version of the Teenage Mutant Ninja Turtles (Arcade Game) game which had a slight fault with it - no one could play as Donnie.

Episode idea for @arcadeattackUK: “the 32X version of Space Harrier vs the arcade version. Is it REALLY arcade perfect?”

I then tried out Beyond a Steel Sky - the upcoming sequel to Beneath a Steel Sky - I’d recommend playing both, if you are into cyberpunk or point and click adventures.

It was an honour to meet the amazing Jay and Squidgey from @wafflingTaylors at #EGX2019 ! They are real top blokes! Here’s a pic of Jay and Dyl from @arcadeattackUK kicking Doom butt! 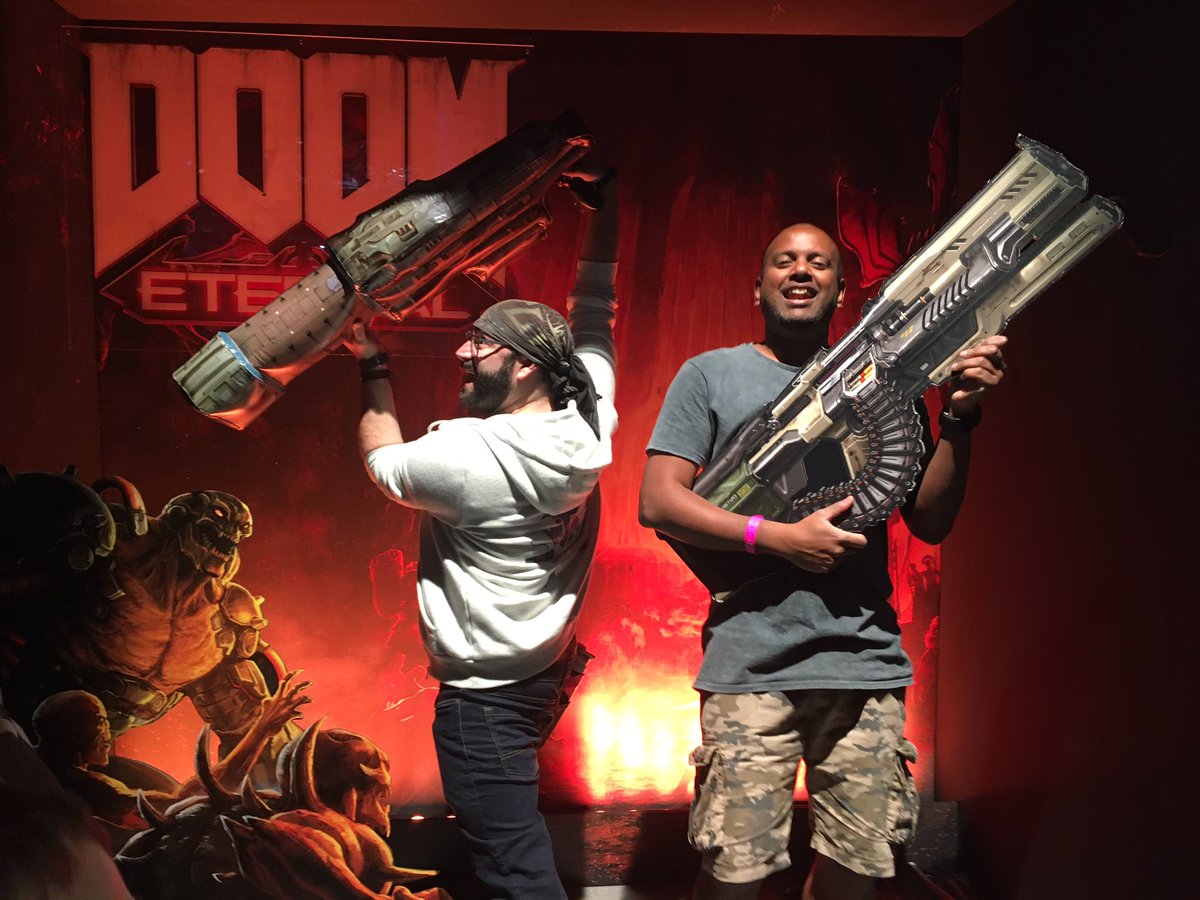 But before all of that, Luke form the Adventure in Aellion development team was gracious enough to give me a little of their time to discuss their upcoming game. And what a gorgeous game it is:

they’ll all open in new tabs

Having played the game a few times before interviewing Luke, I can say that it’s a lot of fun to play and is beautiful to look at. Plus, almost unlimited multiplayer dungeon crawling WITHOUT the headache of organising servers sounds like a load of fun to me.

I can honestly recommend trying this game out when it shows up on Steam Early Access - some time in February or March time. It really is a lot of fun

and they’re talking about it being proper cross platform

and I can’t wait to hear just how many people can play concurrently. I can oly imagine how cool it would be to watch those streamers that Luke mentioned simultaneously, across multiple twitch/mixer/etc. channels at the same time. Definitely keep an eye on this game, folks - especially if you’re a fan of games like The Legend of Zelda: Breath of the Wild, but wish that it had multiplayer. In fact, one of Luke’s colleagues actually described it as:

Multiplayer Zelda Breath of the Wild

I did get a little of an inside scoop on just how well the Switch plays this game, too

You’ll have to wait until it’s released to see just how amazingly well it plays on the Switch.

I’m going to see if we can re-connect with the development team, once the expo and convention circuit has ended, and see if we can get them on the show. I’d love to learn a lot more about the inspiration of the game, and

even just for my own curiosity

how they went about making it.

Many thanks to both Jon and Lucy from Game If You Are for helping to set up the interviews with Craig (of Kung Fu Jesus) and Luke.